on February 21, 2021
On a normal day... in 2018 when I was in my usual designer mode and doing the designerly things…. doodling across my pocket book, reading design related books, observing the cinematography in movie whose language I hardly understand and discussing politics with folks over an all nighter : I questioned my contribution towards my mother tongue Telugu. I still remember that it was 2:30 a.m. and I was completely engrossed in thinking how I can make Telugu more appealing to the current generation.. who are mostly into millennial stuff like IT, Shopping, Fitness,Travelling etc., ;) It was then, that all of a sudden the concept of 'Made in Telugu' struck my mind and from here on the journey begun. Standing in the shoes of the audience what caught my mind is to run a campaign of sorts in alignment to this and which could be represented both in Telugu and Latin script.
Over the days my focus and observation in a designer mode was on to create this. And it happened that I saw the ‘TATA’ logo. In that moment that I got the idea that I can fit ‘తె’ in T. That is when I decided, that instead of having 2 separate identities in Telugu & Latin, the idea of a creating a single identity popped up.

‘Telugu’ (Latin) had 6 letters and ‘తెలుగు’ (Telugu) had 3. Noticeably, here I had to work on fitting in 3 Telugu characters into 6 Latin letters. So I divided the latin word into 3 parts; Te_Lu_Gu.

Explorations working with typography
For ‘తె’ (Te) lowercase ‘e’ had to fit in seamlessly with the overall form of ‘T’ and what better way than ‘BlackLetters’.

‘T’ with circular segment at the beginning is chosen for this and the top horizontal stroke was modified for ‘ె’ (Top Vowel mark). Thereafter ‘e’ was placed is similar style near it, to form the character ‘తె’.

Next in order was, L & U. This was comparatively easy as ‘LU’ in Latin was visually close to ‘లు’ in Telugu. The challenge here is_ uppercase ‘L’ doesn’t have a loop at the beginning of the stroke, where as ‘ల’ has one. For that reason, I used swash extension and developed the characters together in similar Blackletter style before moving to craft ‘GU’

Again ‘GU’ and ‘గు’ visually similar but, the talakattu (top vowel mark), was coming in the way of ‘Black letter’ styling. Subsequently, swash extension of ‘L’ was linked to ‘talakattu’ of ‘గ’ to complete the task. 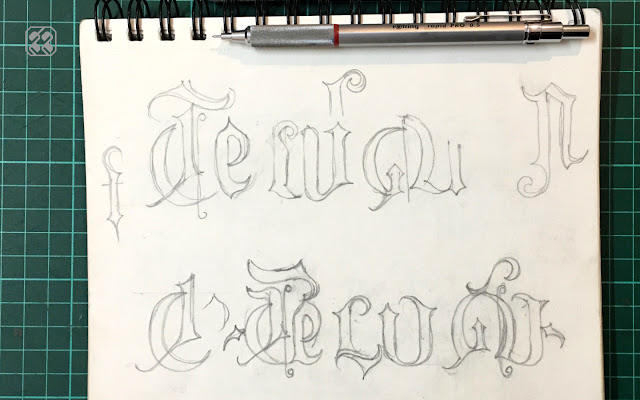 Initial sketches
This is about designing identity for ‘Made in Telugu’. Unfortunately, it did not materialise and fizzled out.

Eventually it evolved into I AM Telugu and a t-shirt is designed for the same.. ohh and also to encourage Telugu speaking/writing/talking to be more normal and at ease and not to be ashamed of…

...just flaunting your T-shirt and the Teluguness. 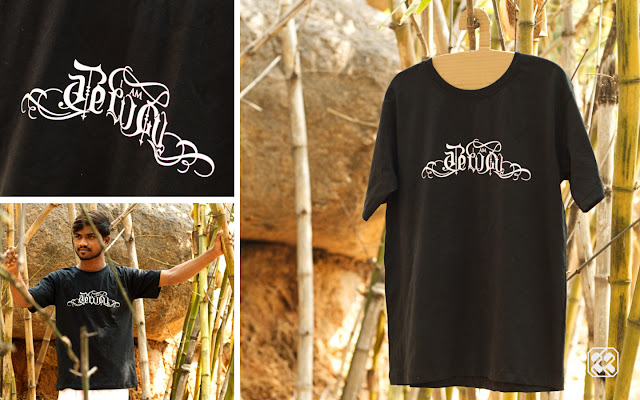 The final output
Flaunting the Teluguness